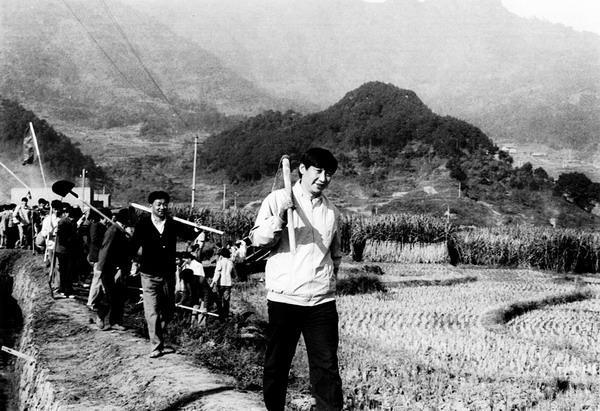 This undated photo shows Xi Jinping working together with locals in 1989 when he worked in Ningde, Fujian province. (PHOTO / CHINA.ORG.CN)

A book that recounts President Xi Jinping's work as a senior official in Fujian province has been published by the Party School of the Communist Party of China Central Committee Publishing House.

The book features 35 interviews with local officials, workers, experts and journalists who tell about President Xi Jinping serving as the deputy secretary of the CPC Fujian Provincial Committee and the provincial governor

The book features 35 interviews with local officials, workers, experts and journalists who tell about Xi serving as the deputy secretary of the CPC Fujian Provincial Committee and the provincial governor.

Xi, who is also general secretary of the CPC Central Committee, worked in Fujian from June 1985 to October 2002, when he served as an official in Xiamen, Ningde, the provincial capital Fuzhou and as a provincial leader.

During his tenure as a provincial official, Xi put forward a vision that prioritized ecological protection, personally oversaw the reform of collective forest rights, promoted measures to tackle water and soil erosion and implemented a digitalization strategy.

Xi also took the lead in the nation in promoting the development of a service-oriented government, highlighted the importance of putting people's health first and facilitated the establishment of an oversight mechanism on food safety from farms to dining tables.

The book also documented Xi's leadership and work style, and his strong attachment to grassroots bodies, the people and their wellbeing.