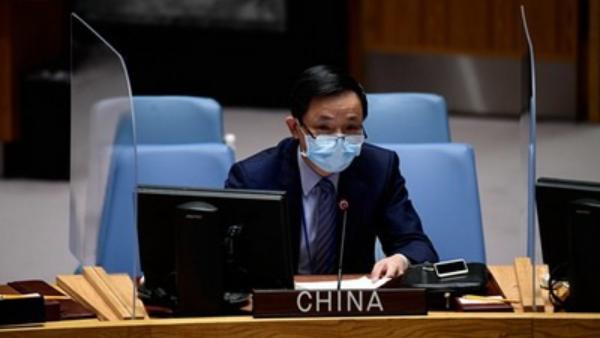 A Chinese envoy to the United Nations on Wednesday rejected what he denounced as false information from the United States on the origins of the coronavirus, saying that "political manipulation is unpopular, cannot defeat the pandemic and is doomed to fail".

"The US representative once again abused the UN platform today and used the issue of virus origin tracing in political manipulation, which is completely inconsistent with the original intention of the meeting. China firmly opposes this," Dai Bing, charge d'affaires of the Permanent Mission of China to the UN, said in an informal meeting of the General Assembly on the findings and recommendations of the Independent Panel for Pandemic Preparedness and Response.

China has been "actively participating in international traceability cooperation" and has twice invited experts from the World Health Organization to China to conduct research on this issue, said Dai.

"The WHO experts went wherever they wanted to go, met all the people they wanted to meet," the envoy pointed out. "They made a scientific conclusion that 'a laboratory leak is extremely unlikely' and put forward important suggestions such as 'searching for possible early cases on a global scale', which has been widely recognized by the international community."

The next stage of traceability should be continued on that basis, and various early cases have been discovered in many countries around the world, Dai said.

The envoy said that the US deviated from science and facts. The country politicized and stigmatized the issue of traceability in order to shift its responsibility for its ineffective fight against the COVID-19 pandemic, he said.

To achieve its political purpose of discrediting and suppressing other countries, the US has been completely lost by spreading false information and lies.

Dai Bing, chargé d'affaires of the Permanent Mission of China to the UN

"To achieve its political purpose of discrediting and suppressing other countries, the US has been completely lost by spreading false information and lies," said Dai. "The US has lost its bottom line of scientific ethics."

In fact, Dai said the second-stage traceability work plan proposed by the WHO Secretariat has been severely politicized, and many countries have expressed serious concerns and opposition to this.

"China is willing to uphold the spirit of openness, transparency, science and cooperation. China supports promoting the traceability research cooperation in many countries around the world on the basis of full consultation among member states," said Dai.

However, "the source of the political virus must also be traced", the envoy said. "We urge the US to respect science, save lives (and) stop disrupting international anti-epidemic cooperation and virus traceability cooperation," he said.

"We urge the US to welcome WHO experts to come to the US to conduct traceability research in an open, transparent and cooperative manner."

Regarding the second phase of the WHO-led COVID-19 origins study, the EU Commissioner for Innovation, Research, Culture, Education and Youth on Tuesday issued a statement in support of it, together with science officials and advisers from Australia, the US and Japan.

Their joint statement was swiftly rejected by a spokesperson of the Chinese Mission to the European Union.

"The virus is the common enemy of mankind, and the only way to defeat it is to pull together with solidarity and cooperation. We firmly oppose the practice of political manipulation in the name of open and transparent scientific study," the spokesperson said.

The spokesperson noted that nearly 60 countries have recently written to WHO Director-General Tedros Adhanom Ghebreyesus or spoken up individually on the issue of studies into the origins of the coronavirus.

They emphasized that it is a matter of science that should be studied around the world by scientists. They also stressed that the virus-tracing efforts should not be politicized and that a joint WHO-China study report released by the WHO should be upheld. These objective and rational voices should be respected and valued.

"We urge relevant parties to stop politicizing the issue of origins tracing, stop using this issue to scapegoat others and shirk responsibility, and stop deliberately disrupting international cooperation on global origins tracing," the spokesperson said.

"They should adopt a truly responsible and scientific attitude, and work with the international community to make due contributions to defeating the virus and protecting people's health and wellbeing," the spokesperson said.

Chen Weihua in Brussels contributed to the story.