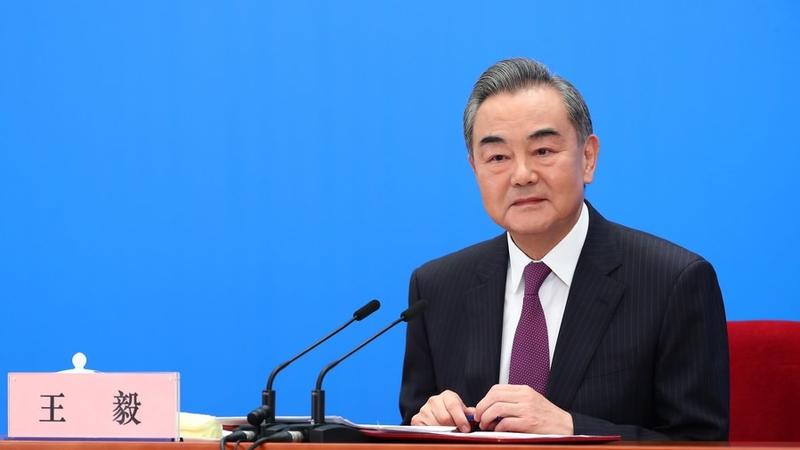 Chinese State Councilor and Foreign Minister Wang Yi attends a press conference on China's foreign policy and foreign relations via video link on the sidelines of the fourth session of the 13th National People's Congress (NPC) at the Great Hall of the People in Beijing, capital of China, March 7, 2021. (PHOTO / XINHUA)

State Councilor and Foreign Minister Wang Yi will participate in a series of foreign ministers' meetings on East Asia cooperation via video link from Tuesday to Friday, according to a statement released by the Foreign Ministry.

This year marks the 30th anniversary of the establishment of dialogue relations between China and the Association of Southeast Asian Nations.

The meetings come as East Asia cooperation has been enjoying a sound momentum of growth while the resurgence and fluctuation in the pandemic situation and the flare-up of regional hot spot issues have added more complexity to it.

The statement quoted a Foreign Ministry spokesperson as saying that China will continue to play its role and do its best in meeting regional countries' demand for vaccines.

"We support joint efforts to build a regional vaccine manufacturing and distribution center to promote vaccine accessibility and affordability in the region," the statement reads.

All sides should adhere to a science-led response and reject politicization or stigmatization, it added.

According to Chinese Ambassador to ASEAN Deng Xijun, China has delivered over 100 million doses of COVID-19 vaccine to ASEAN members, accounting for more than 70 percent of global vaccine assistance to the bloc.

In order to boost economic recovery, the spokesperson said, efforts should be made to coordinate post-pandemic national development strategies and foster new engines and highlights of cooperation in the region.

"We should work for the early entry into force and implementation of the RCEP (Regional Comprehensive Economic Partnership) Agreement, and keep regional industrial and supply chains stable and unobstructed," the spokesperson said.

Also on Monday, a Foreign Ministry spokesperson condemned the United States and the European Union for their repeated comments on the affairs of the Hong Kong and Macao special administrative regions.

The spokesperson made the comment after the US State Department and the European External Action Service criticized Macao's decision to disqualify 21 candidates from running in its Legislative Assembly election in September.

China firmly opposes interference in Macao's affairs and other internal affairs of China by any external forces, the spokesperson said.

The ruling made by the Court of Final Appeal of the Macao SAR on the basis of laws and facts has implemented the fundamental principle of "patriots administering Macao", and safeguarded the constitutional order enshrined in the Constitution and the Basic Law, the spokesperson said.

It also kept the election of the seventh term of the Macao Legislative Assembly free from irregularities, the spokesperson said.

"The relevant decision is supported by all sectors in Macao, and we firmly support it," the statement quoted the spokesperson as saying.

Noting that Macao is China's SAR, the spokesperson said that China will continue to ensure the steady and sustained implementation of "one country, two systems" with Macao characteristics.