Hong Kong, May 24, 2022 (GLOBE NEWSWIRE via SEAPRWire.com) — Catheon Gaming (“the Company”), the fastest-growing integrated blockchain gaming & entertainment company, announced today a collaboration with MultiMetaverse Inc (“MMV”) to bring Aotu World in the form of Aotuverse onto the blockchain. 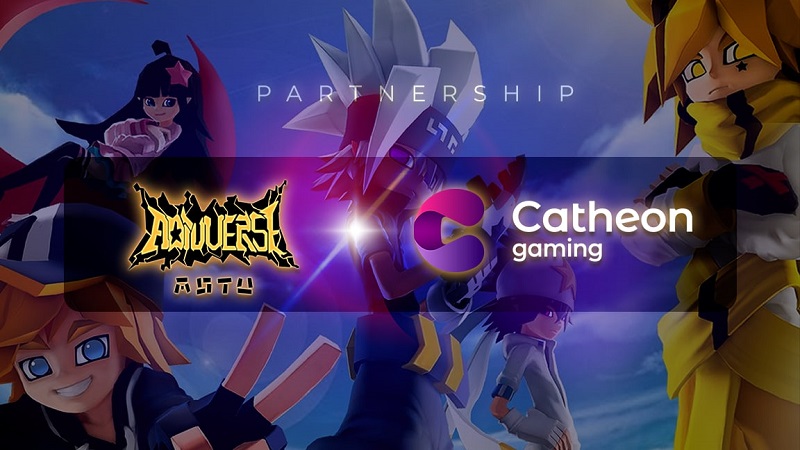 Aotuverse is the blockchain, web3 version game based on Aotu World; the game spun off from Aotu World, the popular anime franchise. Aotu World is among the most popular animation series in China, as per the public polls, viewership and topic data on mainstream Chinese social media platforms such as Bilibili, Douyin and Kuaishou.

Aotu anime has amassed a fanbase of over 10 million; it also has a cumulative viewership of over 1 billion. Based on Aotu anime, there are extensive derivative content offerings to attract and retain fans in the long run, such as mobile games, comic books and collectibles. Autoverse is adapted from the international version of the Aotu World mobile game. The gameplay is based around a competition in which multiple players has the opportunity to enter and compete for a prize. Each anime character in the game has an exciting backstory to fully immerse and engage gamers, showcasing real entertainment value at its core.

MMV is an international animation and entertainment group with a deep understanding of AotuWorld and its appeal. Autoverse was founded to bring blockchain technology to a wider global audience and give anime fans and gamers alike the opportunity to plug into an ecosystem of direct interactions with a decentralized game and the community that surrounds it.

Both Catheon Gaming and MMV recognize the global popularity of anime and the industry’s longevity. The anime gaming audience accounted for $1 for every $5 spent through the app stores on mobile games in 2021. The growth in global popularity is fueled by the availability of anime content on streaming platforms such as Netflix, in emerging entertainment markets, and in core P2E gaming markets. The current consumption of anime is supported by collectibles and memorabilia, which paves the way for introducing NFTs into the space.

William Wu, CEO of Catheon Gaming, said: “The global anime market size was valued at US$24.80 billion last year and is expected to reach US$26.89 billion this year. The opportunity is ripe to capitalize on this exponential growth, and with anime’s popularity, we see it as the perfect marriage between the traditional entertainment world and blockchain. A game like this will harness the potential of NFTs and gaming, offering fans a fully immersive digital experience but without compromising on entertainment value. Catheon Gaming is pleased to play a role in bringing Web3 to one of the most popular entertainment industries in the world.”

MultiMetaVerse commented: “Aotu World is a popular anime franchise among younger generations in China, with unique artwork and inspiring character story development. It has attracted tens of millions of fans and a large group of UGC creators. We are delighted that our game product, adapted from the Aotu World franchise, will embrace the decentralized community outside China via Catheon Gaming. We truly hope that users embrace the game and the Aotu World franchise in return, and we look forward to having more UGC creators join MMV’s UGC creator community. Together, our goal is to build an immersive and multi-faceted entertainment experience around Auto World.”

Catheon Gaming is the fastest-growing integrated blockchain gaming and entertainment company globally. The company’s flagship franchise, SolChicks, entered the market following successful fundraising from various venture capital investors, institutions, and launchpad partners. The company brings technical, gaming, and marketing expertise together with deep roots in the blockchain industry. The company’s strategy is to partner with leading game developers and IP holders to incubate and launch “best-in-class” blockchain games and bring them to the widest possible audience.

MultiMetaVerse is an international animation and entertainment group devoted to establishing an open community for global users. They look to provide immersive and multi-faceted entertainment experiences with high-quality original content and a wide range of professional user-generated content. MultiMetaVerse is licensed to utilize, adapt and market the Aotu World franchise outside China to bring it to a global stage